It’s finally a rainy day here in SLO where I get to spend (most of) my time indoors, hiding from the horizontal rain and inconsolable winds. As much as I want to say it’s been a productive day that included a nap, it has been quite the opposite. But that’s okay, nap or no nap, I still accomplished some things.

Maybe it’s the idea of turning 20 soon or the lack of control any of us really has, but I’m starting to understand something: It’s not about being immaculate, about getting things right the first time, the second time, or even the 100th time you tell yourself, “okay, last try before I’m giving up.”

No, it’s about painting over the mess, making something beautiful and something worth it, out of the chaos that is this life.

Because I’m sure we all know by now, it comes with a whole lot of mistakes, failed attempts, half done work, and frustrated sighs before trying again. Where would any of us be if we got everything right on the first try– other than immensely talented and most likely too proud, we would all be hopelessly bored.

Success can get you a lot of places, don’t get me wrong; but I think failure can get you

farther. Let me tell you why.

Do you remember that one blog post back in October, maybe September, when I told you that I was trying my hand at painting for the second time in my life? The first time was in my junior year of high school for a transformation project in art class and I thought I was doing great… That is until I tried to paint faces on my figures and it all just crashed and burned from there. Trust me, Nick still laughs at my finished product every time I bring it up.

So that second try? Well that didn’t go too well either. I was so focused on the right lines, the details, and not messing up– after all, I was out of my element and paint doesn’t exactly have erasers– I quit fifteen minutes in. And the un-finished, finished, product? I can attest to this: it also looked pretty terrible.

Hence why when I pulled it out this afternoon, it was hidden behind the ever multiplying books on my bookshelf. Clearly, I was not fond of attempt number 2. Even with my past failures, in my restless need to avoid feeling stuck despite how often I do, I took out that canvas today, grabbed my paints, and  sat down with it all laid out in front of me.

front of me, running my fingers over the names of each and every color trying to decide what the right direction was to go in. I had to wonder, was there even a right direction anymore once I had tried out all the others?

Now pause right here; I was sitting on the floor looking at something that I made a mess of, all because I kept trying to make it good enough. Sure, its a commonplace idea of being okay with imperfection, but that’s not all I need you to see here.

I want you to see the fear behind the uncertainty, the need to get it right. The desperate reach for validation each of us holds in knowing we could be good enough at something.

Personally, I wanted to stop feeling that pull toward what I thought things should turn out to look like, toward expectation. I did the only thing I could think of to get that little voice in the back of my head– the one telling my that I needed to do this or I should probably do that if I had any hope of it looking good– to stop.

I painted over it.

I put on my headphones, turned the music up to drown out both the immensity of the silence and my own thoughts, and I went to work. My fingers reached for two colors, put them on my plate, and mixed. Swirl, dab, swirl, brush brush brush. Look for a second. Shrug. Pick another one, add it in, swirl, dab, shrug, brush brush brush. Take another peek.

I did this for a while, lost track of time, and it was… Different.

With the music too loud to concentrate on what I was thinking and no real expectation to hold on to, I sat there and watched as the original mistake was altered, changed, revised, and rearranged.

I watched as I let the fear slip away, 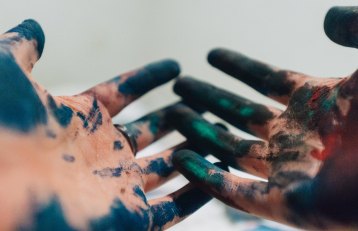 the expectation and the need to succeed. The less I thought about it, the more I enjoyed what my hands wanted to pick.

I let go of being afraid of what might happen in allowing myself to paint outside the lines. Sometimes you have to let the chaos in and ignore the gravity we believe success or perfection has. Nothing truly needs to be perfect the first time, the second time…

You just have to be willing to build each and every try into something that you can appreciate.

One thought on “The Art of L o s t Expectation”